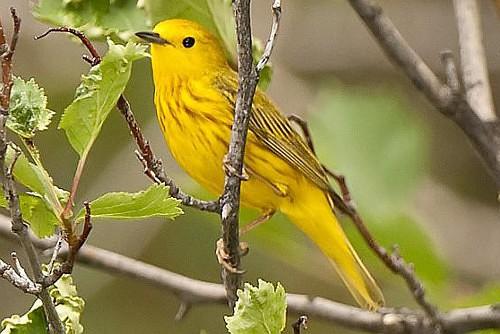 Characteristics and Range Petite and lovely, the Yellow Warbler has some of the brightest colours in the warbler world. In breeding plumage, its bright yellow plumage and subtle reddish breast-streaks shine out from the green leafy thicket where it nests. It has bright, black eyes and a sweet song, sounding a little like "sweet, sweet, sweet looka-thew". It nests in alder and willow thickets, parks, and gardens throughout North America. The Yellow Warbler is a neo-tropical migrant that mostly winters in the lush rain forests of Mexico, Central and South America (Lowther et al. 1999).

Distribution, Abundance, and Habitat Atlas records indicate that Yellow Warblers occur throughout practically all areas of British Columbia, with the highest concentrations in the southern parts of the province and along the Peace River. Despite more coverage of some areas, the Atlas surveys didn't show any new or unexpected expansion since The Birds of British Columbia was published. It is reasonable to assume that this warbler also nests at lower altitudes in British Columbia's northern interior as they occur in similar areas in southeast Alaska (Woodford 2006). Yellow Warblers migrate through Haida Gwaii but do not nest there, although they nest on the adjacent mainland.

The Probability of Observation model shows that the Yellow Warbler is most likely to be found in the Peace River lowlands, and on the floors and lower slopes of the Skeena, Nass, Columbia and Okanagan valleys. Atlas point counts refine this picture further, showing the centre of highest abundance (almost three times higher than in any other ecoprovince) is in the Boreal Plains Ecoprovince around the Peace River. The second highest abundance is in the valley systems of the Coast and Mountains Ecoprovince. Province-wide, Yellow Warblers are 2-3 times more common between 500 and 1,000 m than above or below that altitude band.

The Yellow Warbler can be found at lower elevations in British Columbia Wherever ravines, riparian thickets, willow thickets and well-watered garden habitats are found. It occurs in cut-over areas which are regenerating to deciduous thicket and deciduous scrub woodlands. These habitats are widely distributed in British Columbia, and so the Yellow Warbler is common in a range of different biogeoclimatic zones. In areas where older growth coniferous forests are logged off and replaced by deciduous brush, Yellow Warbler numbers may increase. Ehrlich et al. (1988) note that "populations in the west increase where reduction of grazing, and cessation of herbiciding willows, has led to regrowth of riparian vegetation."

Conservation and Recommendations The Yellow Warbler thrives in deciduous forests and riparian areas. It may be one reason why it appears to be faring better in British Columbia's second-growth deciduous forest than across Canada as a whole, where Breeding Bird Survey results indicate that it is declining. As such, Yellow Warblers are an indicator species, one guide to the changing landscape of British Columbia, and may be one of the first to expand into early successional habitats. It is worth following this trend over time as coniferous forests begin to mature.