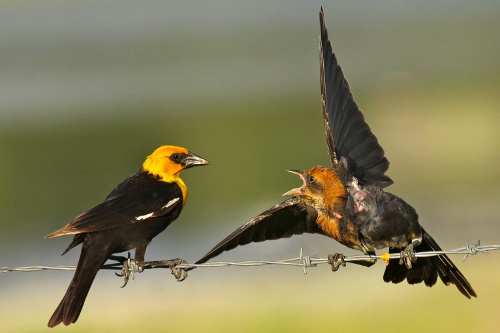 Characteristics and Range As Roger Tory Peterson famously remarked about the Bald Eagle, the male Yellow-headed Blackbird is "all field mark". The bright heads of the males may be clearly visible around a nesting colony in a marsh, but the dusky-brown females at the nests are more difficult to detect. This poses problems for field surveys because these birds are polygynous, and a single male can be responsible for up to eight nests. The breeding range of this bird encompasses the Great Plains and cordilleran regions of western North America, although it is absent from the Pacific Coast. It winters primarily in the agricultural areas of Texas and the Southern Coastal Plain, and south to central Mexico (Twedt and Crawford 1995).

Distribution, Abundance, and Habitat Campbell et al. (2001) describe a "significant range expansion" of this species during the 20th Century, although this was tempered by asynchronous localized variability in numbers due to fluctuating water levels and infilling of marshes. The Atlas results indicate that breeding is largely restricted to the central-southern interior, and range expansion has not continued since The Birds of British Columbia was published. There has certainly been range contraction in southwestern British Columbia, where this species has almost abandoned the Georgia Depression Ecoprovince, and the extent of the breeding range on the Chilcotin Plateau may also have declined.

Atlas point counts confirm that this blackbird is most abundant in the Central Interior and Southern Interior ecoprovinces, as reported by Campbell et al. (2001). The Southern Rocky Mountain Trench is a smaller but important area that also supports a relatively dense blackbird population. The highest Probability of Observation values are concentrated on the Fraser Plateau and in the Thompson, Nicola, and south Okanagan drainage basins. Abundance is highest between 500 and 750 m elevation, corresponding to relatively low parts of the interior plateaus and valley floors in the southern interior where marshes are common. The highest PObs values, between 250 and 500 m, represent the lowest elevations where this species breeds, specifically the floor and lower benchlands of the south Okanagan Valley.

Conservation and Recommendations Populations of this blackbird are generally stable across its range, and many benefit from wetland conservation actions. However, as a colonial breeder, it is vulnerable to local extirpation when marsh habitat is lost in populated areas, such as the Okanagan, through infilling to create land for residential areas and industrial development. In Manitoba Yellow-headed Blackbird reproductive success is regulated mainly by Marsh Wren predation of eggs (Picman et al. 2002); it would be useful to clarify whether this is also a main regulatory factor in British Columbia.