We used two approaches to try to define centres of occurrence and abundance for about 240 species for which we had sufficient data. First, we used all Atlas data, including point count data and information on search effort, to model and map the predicted chance of finding the species after 20 hours of searching a 10-km square – the “Probability of Observation”, or PObs (pronounced “Pee-Obs”). Second, using only point count data, we calculated observed abundance in the 10-km squares where the species was detected on point counts. The PObs maps show how likely a species is to be found anywhere in the province. A species was predicted to occur in an unsurveyed square if that square lies within the species’ range, shares biogeoclimatic features with areas where the species is known to occur, and includes the elevation range the species uses in British Columbia. Darker colours on the PObs maps indicate areas where a bird is more likely to be found. PObs relates to abundance, and for some species PObs can accurately indicate abundance, but for others it does not, hence the need to combine PObs with actual abundance to identify the main centres of population, which are described in the species account texts by biogeographic regions, broad climate-vegetation types and elevation ranges.

What is Probability of Observation?

Probability of Observation is a measure of detectability that can be used to indicate bird distribution and abundance in bird atlases. This metric incorporates information on bird abundance, as well as the amount of time it takes an atlasser to locate a particular species (i.e., search effort). The concept is simple: when we look across all species, squares, and atlassers, on average abundant species are likely to be found more quickly, whereas rarer species take longer to detect. In a project of this size, for each species there are many detections and corresponding estimates of search effort, which allows us to obtain reasonable estimates of the ease by which each species can be found. This approach is useful, because it provides estimates that are comparable among squares in situations where search effort is not equal among squares, not all squares were surveyed, there were a large number of observers, and it may have been difficult to accurately assess the total number of individuals present at all surveyed point count locations due to variations in habitat structure or breeding behaviours. The likelihood estimate afforded by the PObs measure is therefore useful for identifying the core areas of a species’ range, after accounting for differences in survey and geographic effort.

We used data collected by atlassers during 10-km square searches and during five minute point counts to build models that made predictions about the likelihood of detecting each species in all areas of the province, within a fixed amount of time (20 hours). The predicted values from the model were what we defined as the Probability of Observation.

Mapping and Interpreting Probability of Observation

Ecological factors such as temperature, moisture, and soils shape the distribution and quantity of habitat, and therefore also birds. We included five topographic variables in our predictive models of PObs that are closely associated with these ecological factors: latitude, longitude, elevation, slope, and aspect. Incorporating topographic variables into the models allowed us to make more reliable predictions for squares that were never actually surveyed by atlassers. For example, if a species’ modelled PObs was high in squares with a suite of specific topographic conditions, the model would predict high PObs in squares with similar conditions, even if they had not been surveyed.

Predicted PObs values were generated using generalized additive models (GAMs) with the binomial distribution. In this type of modelling, the response variable is modeled as a function of smoothed predictor variables, and the degree of smoothing applied to each predictor can be adjusted. During the modeling process we experimented with a range of smoothing values, and for each species we chose the smoother that produced the best statistical fit and/or corresponded most closely with expert knowledge of the species’ distribution. Including detailed habitat layers in the models was beyond the computational scope of a project of this size, so for some species further adjustments to predicted PObs values were necessary. These modifications included limiting the distributions of species that do not inhabit Haida Gwaii, those that do not travel more than 1 km inland from oceanic waters, and those that do not occur in particular biogeoclimatic zones and geographic areas such as the Coast Mountains. In addition, all species were excluded from high-elevation permanent icefields throughout the province. The PObs maps generated from these models are appropriate for making broad inferences about the probability of observing a species in a given area, but they should not be used on their own to make fine-scale predictions about which habitats or features a species will be associated with, because these variables were not included in the modelling process.

As with all modelling exercises, the reader should interpret results with a healthy dose of caution and remember that modelled results are only as good as the data used to create them. Where extensive gaps in coverage exist, users should infer relatively less confidence in the predictions for that portion of the map. Secondly, the finely scaled representation of PObs on the maps, depicting very precise bird presence corresponding to topography, might lead some readers to make inferences that are not warranted. Notwithstanding the level of detail shown, the main purpose of the maps is to provide a province-wide perspective on the distribution and abundance of birds, and not to draw local scale conclusions. Users are therefore encouraged to not “zoom in” too closely when making inferences about the maps.

Figure 2. Segregated centres of abundance and jigsaw-fit distributions of three recently diverged sapsucker (Sphyrapicus) species, illustrating how the Probability of Observation models show how different habitat preferences determine where a species occurs and overlaps (or not) with its congeners.

Probability of Observation: Controlling for Variation in Effort

Using data from squares that were visited at least once during the atlas period, we estimated the relationship between the amount of effort spent searching and the probability of observing a particular species. Estimated values of effort were calculated using cumulative species–cumulative effort curves, because many squares had no effort data. We then used this estimated relationship to predict the probability of observing each species for a constant level of effort.

For the first year in which each square was visited, we compiled a list of species that were observed and the total effort all atlassers expended. We then determined, for each subsequent year that a square was visited, which new species were observed, and how much additional effort atlassers collectively spent prior to observing the new species. We compiled these species lists and measures of effort for each square and each year it was visited, and then analyzed data for each species separately. For every square and year, the data included the total effort spent atlassing in that square up to that point in time, and the species’ presence (i.e., already detected) or absence (i.e., not detected).

How does Probability of Observation relate to Abundance?

While PObs tells us whether a species is likely or not to be found in a square, it does not necessarily reflect the actual abundance in terms of number of breeding pairs or relative density. This is especially true for abundant species. For example, if the population size of American Robins declined by half, there would be only a small effect, if any, on the likelihood of observing the species after 20 hours of effort. In essence, abundant species will almost always be detected after 20 hours of effort, and the PObs statistic is not sensitive to very large swings in population numbers. Conversely, point counts usually represent a small amount of effort relative to the size of the square (usually 10-15 5-minute surveys), and so they are used reliably for only the most common species.

For the Maritimes Breeding Bird Atlas (Stewart et al. 2015), we mapped abundance from point count data using a method very similar to that used for the PObs maps. Instead of fitting models to the PObs, we fit models relating latitude, longitude and elevation to the average count for each species in all of the point counts for a given square. Further, we included in these models the estimated PObs of the species (as described above) to account for the probability that a species was likely present but missed during the short point count as opposed to being outside its expected range. The estimates of abundance from these models were then mapped for each species as described for the PObs models above. In the Maritimes, predicted PObs values were positively correlated with abundance estimates from point counts, strongly so for moderately abundant species, but less so for scarce or very abundant species (Stewart et al. 2015).

We attempted the same process to map abundance in British Columbia, but the models did not predict well beyond sampled 10-km squares, we assume due to the immense variation in topographic conditions across the province and the difficulty of adequately capturing this variation using point counts. We concluded that the PObs models produce the most geographically extensive, accurate and visually informative representation of distribution and abundance for the birds of British Columbia. We are exploring options to map quantitative relative abundance in certain regions of the province that were more thoroughly sampled; any maps we produce will appear in this online publication as they become available.

To summarize the PObs values for each species, mean PObs values were calculated for each Biogeoclimatic Zone, Bird Conservation Region (BCR), and Ecoprovince and are presented in species-specific bar plots. Biogeoclimatic zones are areas of similar climatic characteristics and climax forest types, and there are 16 of these zones within British Columbia. Bird Conservation Regions are similar to biogeoclimatic zones, but are scaled up for use by conservation practitioners at a continent-wide scale. There are five BCRs in British Columbia. Ecoprovinces are areas with similar climatic and major physiographic features, such as plateaus, mountain ranges, and valleys, and there are nine of these regions in British Columbia. When viewed together, the figures showing mean PObs values provide a picture of the broad climatic and physiographic conditions under which each species is most and least likely to be found. 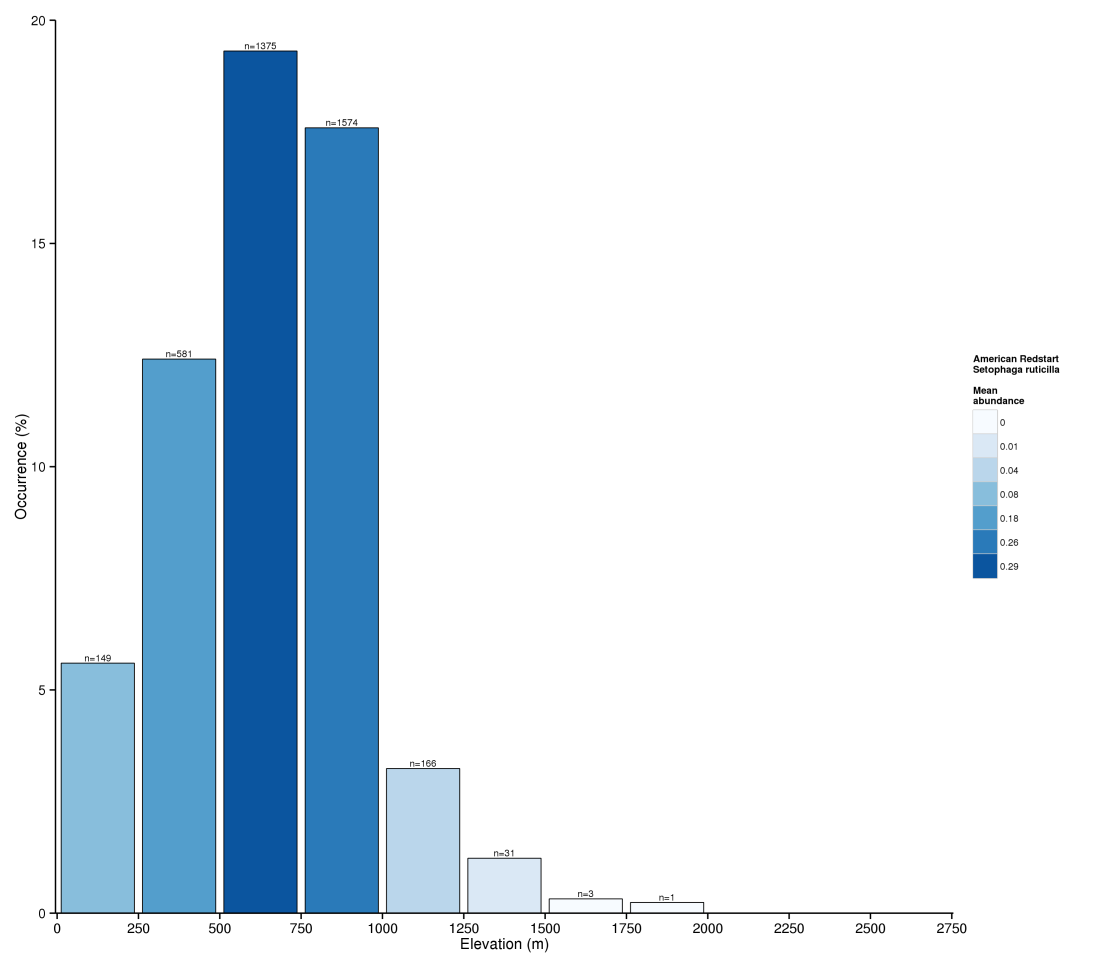 Figure 4. Sample elevation bar graph for American Redstart. Number of point counts on which the species was recorded in each elevation band is denoted by n= at the top of each bar.

Abundance by Ecoprovince and Biogeoclimatic Zone

Species-specific plots showing mean abundance were generated by using data from point counts in all ecoprovinces where the species was recorded. For all 10-km squares in these ecoprovinces where the species was observed, all surveyed point counts where it did not occur where given a value of zero. The ‘Mean Abundance’ values (x-axis) were calculated as the total number of individuals of that species divided by the total number of points surveyed in squares where it was observed. The sample size (n =, above each bar) in the figures denotes the number of points with positive detections of the species in each ecoprovince. Species-specific plots showing mean abundance per biogeoclimatic zone were generated as well, using the same procedure as that used for the ecoprovince summaries. Mean abundance plots are provided only for the 240 or so species with large enough sample sizes for these summaries to be useful. 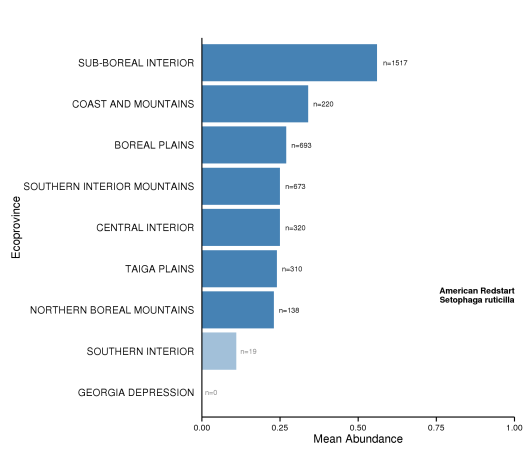 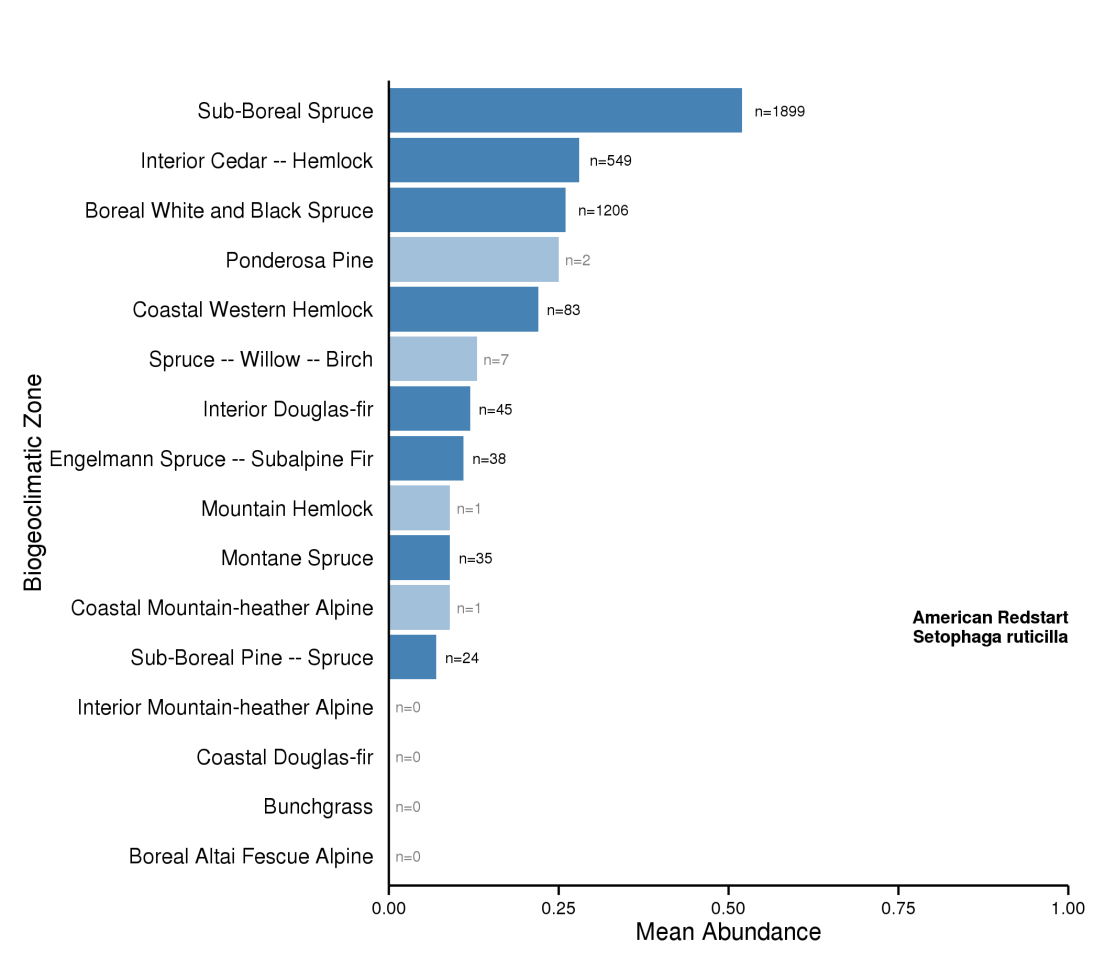 Figure 5. Abundance of American Redstart by Ecoprovince (5a) and Biogeoclimatic Zone (5b). Note, the mean abundance metric is number of individuals per point count within 10-km squares with detections of the species.