Overview of Coverage and Results

Approximately 1,300 participants collectively reported a total of 56,867 field survey hours to the project (not all effort was logged, so the actual effort was greater). Their dedication made this project. The name of every citizen scientist who contributed is presented in the Acknowledgements (Volunteers section).

A total of 344,840 individual records were submitted for 4,508 Atlas 10 km squares. Breeding evidence was submitted for 327 bird species (Appendix 1a). Figures 1 and 2 show the number of hours (by category) and number of species (also by category), respectively, reported in each square. 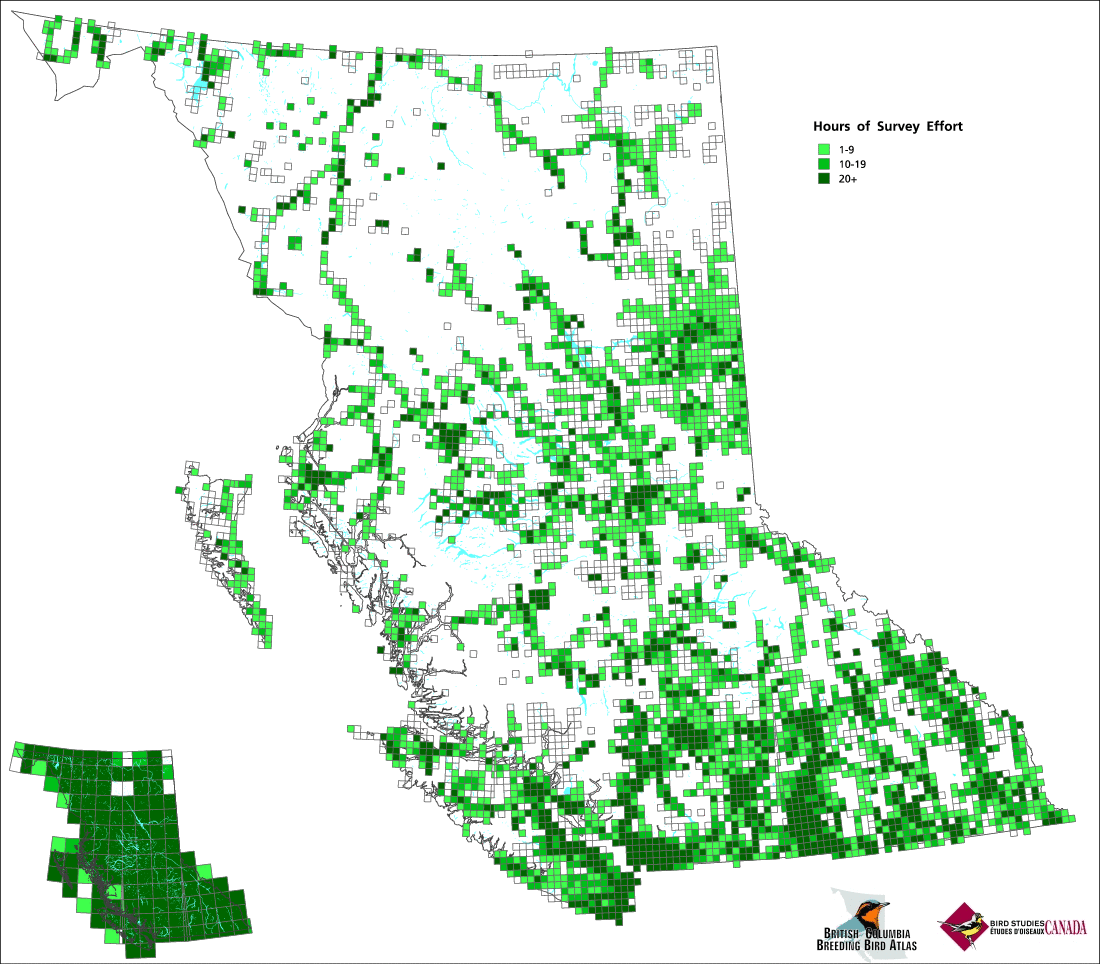 Figure 1. Number of hours of survey effort reported for each 10-km square 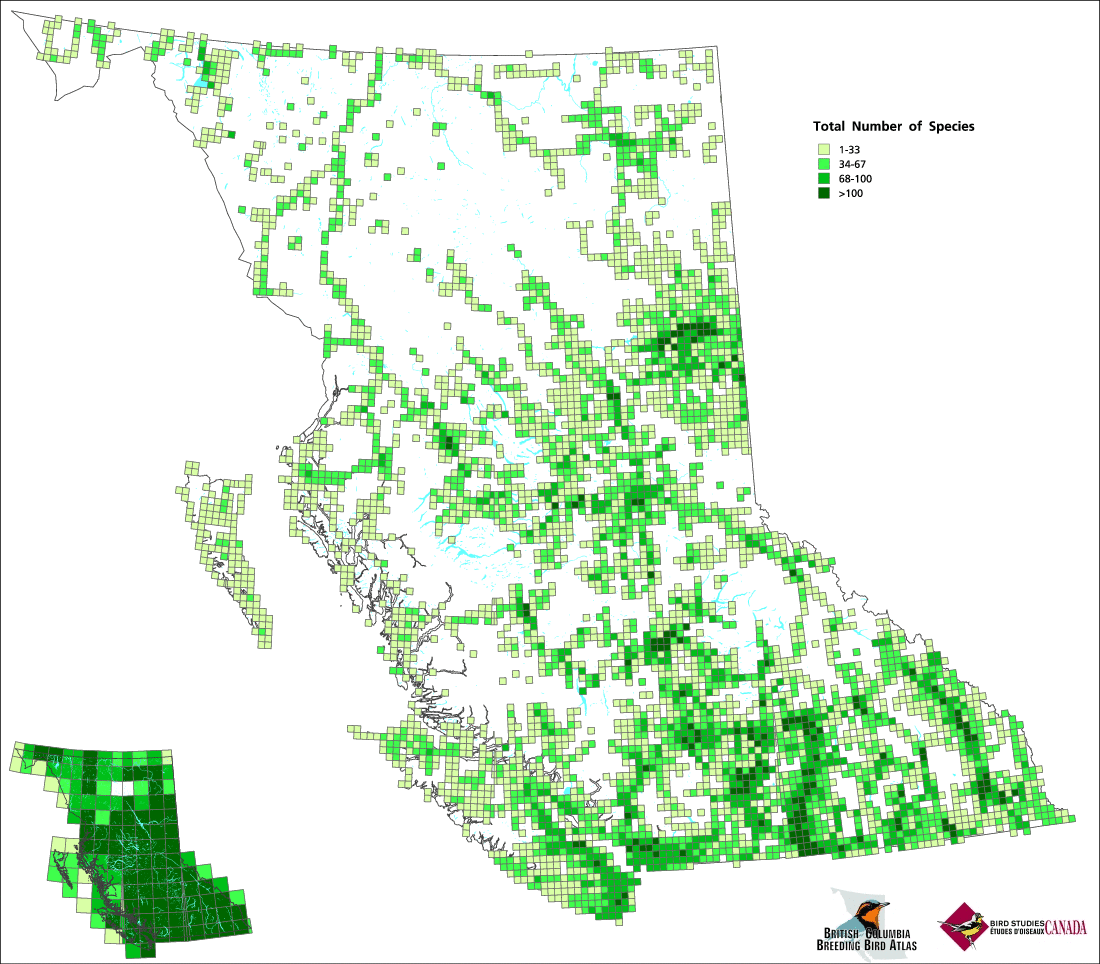 Figure 2. Number of species recorded in each 10-km square

The large number (>1,350) of 10-km squares with 0 hours coverage (Fig. 3) largely represents external contributed datasets from more remote areas where little or no volunteer coverage was possible (see Additional Data Sources, below). Many of these datasets did not have associated effort data, or the effort information was incompatible with the Atlas methodology. These dataset contributions allowed the Atlas to map species in many more 10-km squares than would otherwise have been the case. 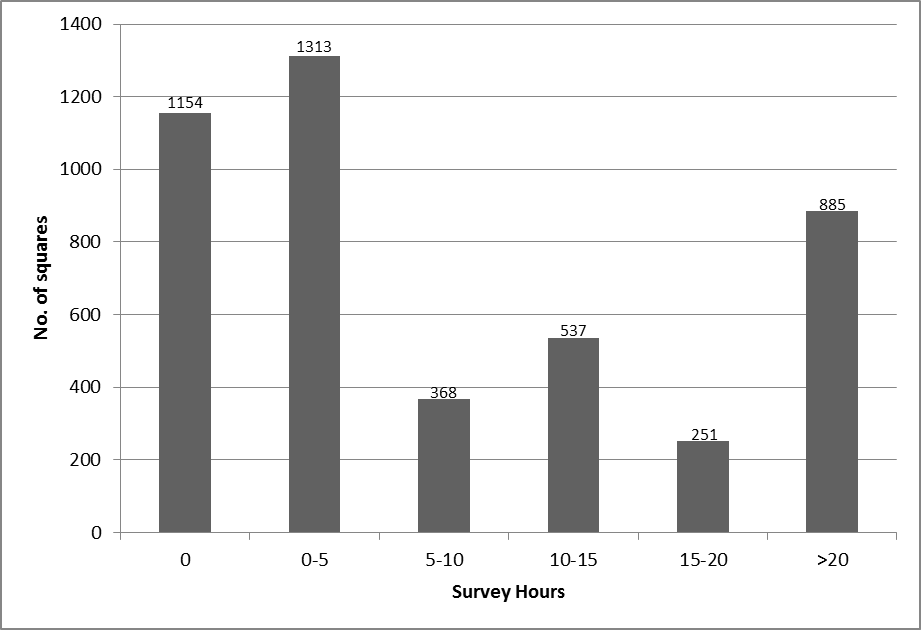 Figure 3. Number of squares surveyed by number of survey hours reported (note, not all surveyors reported the time of each visit to 10 km squares, so bars represent a minimum effort) 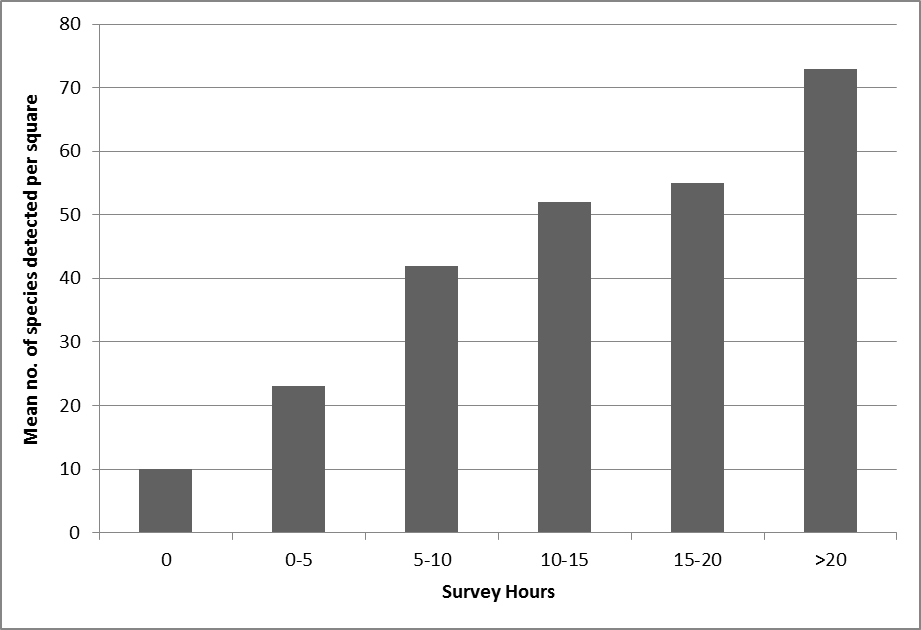 Figure 4. Average number of species recorded per 10-km square by survey effort (number of squares sampled is indicated at the top of each bar) 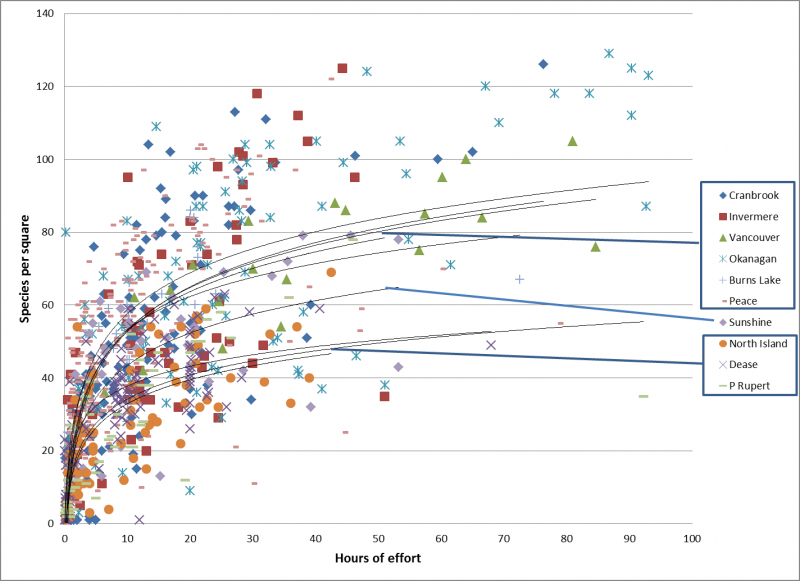 Most breeding evidence survey effort was conducted between May and July (Fig. 6), when the majority of songbirds breed in British Columbia. Survey effort outside this period focused on specific species and guilds, for example dusk and evening surveys for owls (from February to April), specific searches of likely habitat for early season breeders like Long-billed Curlew, Sharp-tailed Grouse and American Dipper, also some waterfowl and raptors, and late breeders, for which survey effort continued well into August, especially at higher elevations.

Therefore, effort was somewhat biased toward species that breed from May through July, and species or groups that breed outside that window may have been under-sampled. If this is known, it is stated in the species account. Approximate breeding dates for bird species in British Columbia are available here. 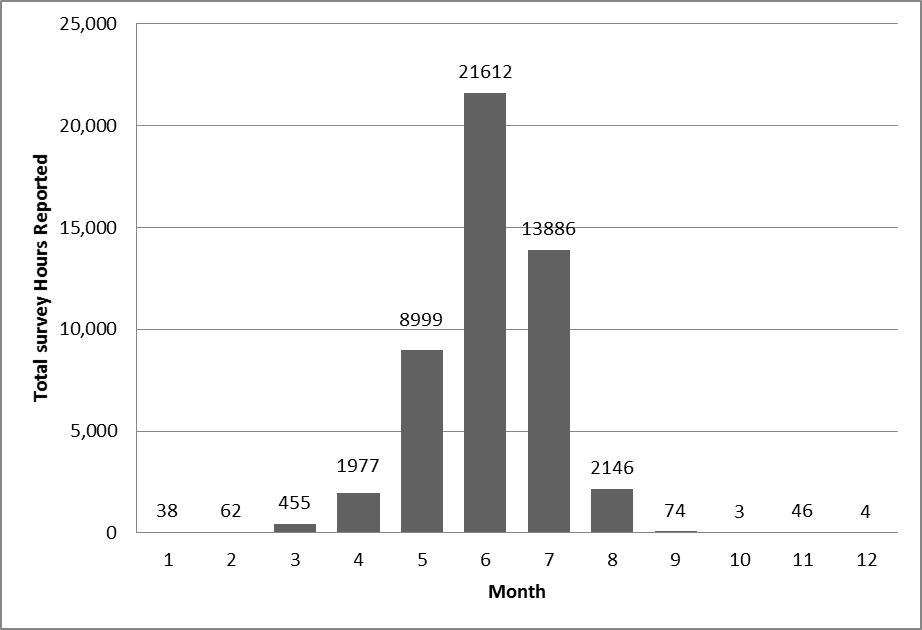 Figure 6. Distribution of reported survey hours by month. Note that early spring efforts (February-April) may be underrepresented because external data sets, such as the B.C./Yukon Nocturnal Owl Survey, did not include survey effort.

A total of 40,207 point counts were completed in 2,316 10-km squares (approximately half of all 10-km squares surveyed by the Atlas; Fig. 7). This effort generated 286,463 individual records for 298 species. Two hundred and seventy two participants conducted the point counts (including 30 who participated as part of a paid crew deployed to more remote regions where volunteer access was difficult or impractical). Volunteers contributed 61% of all point count data. 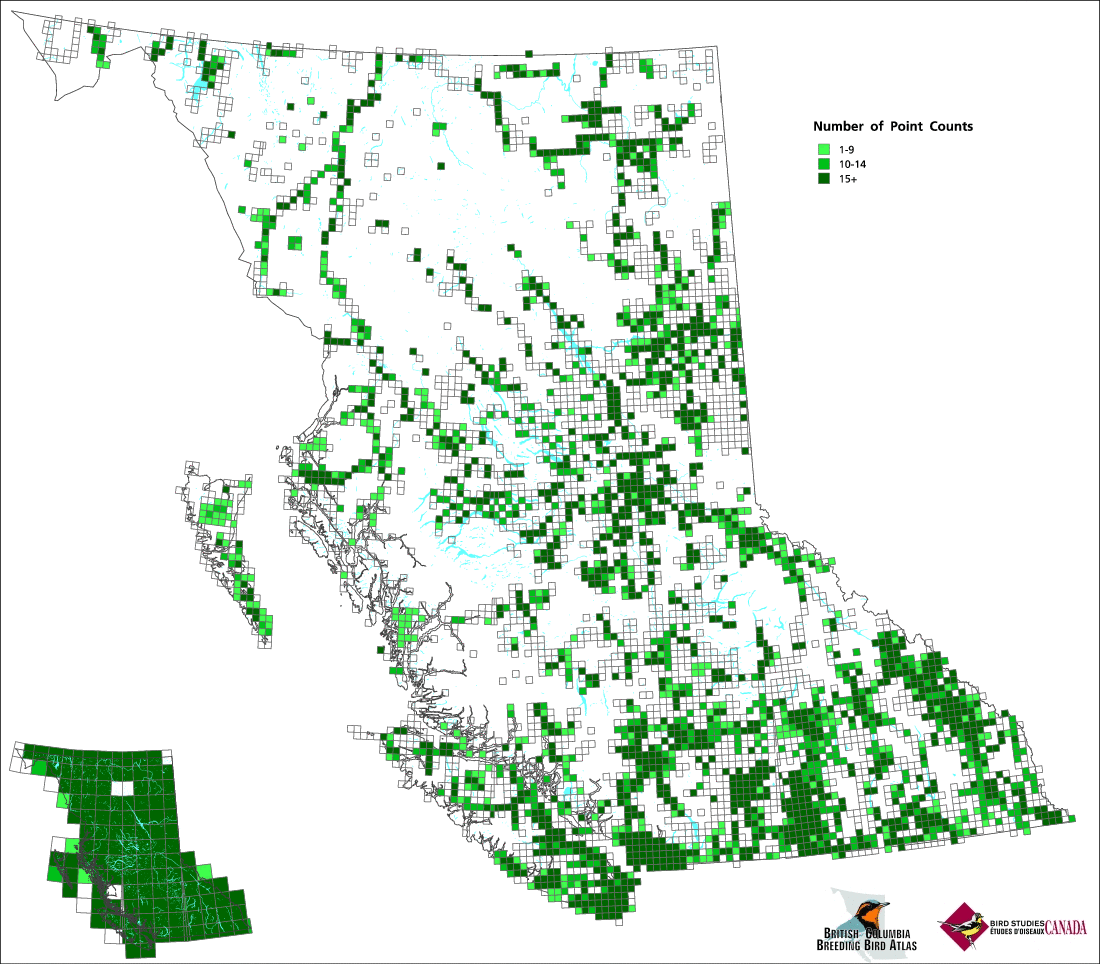 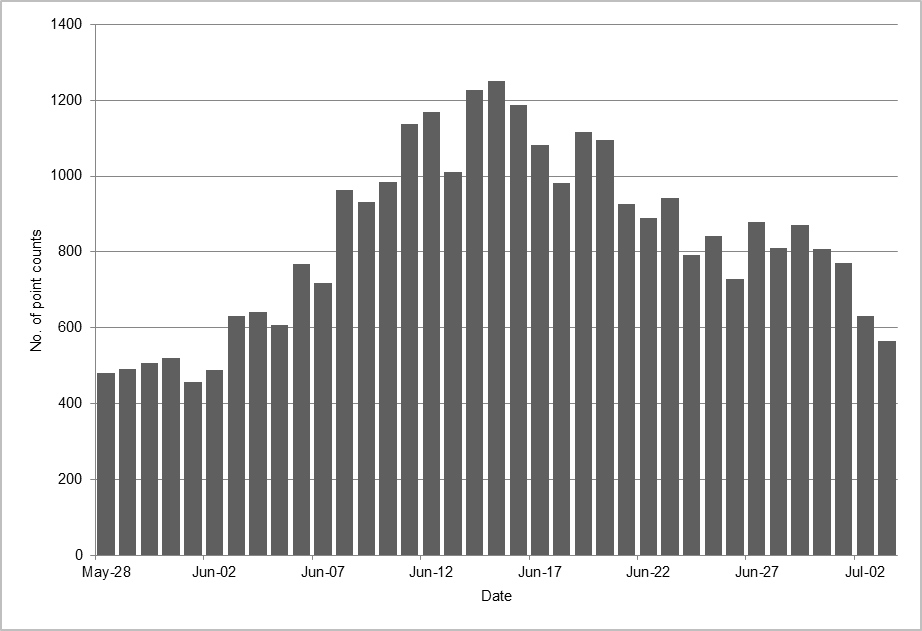 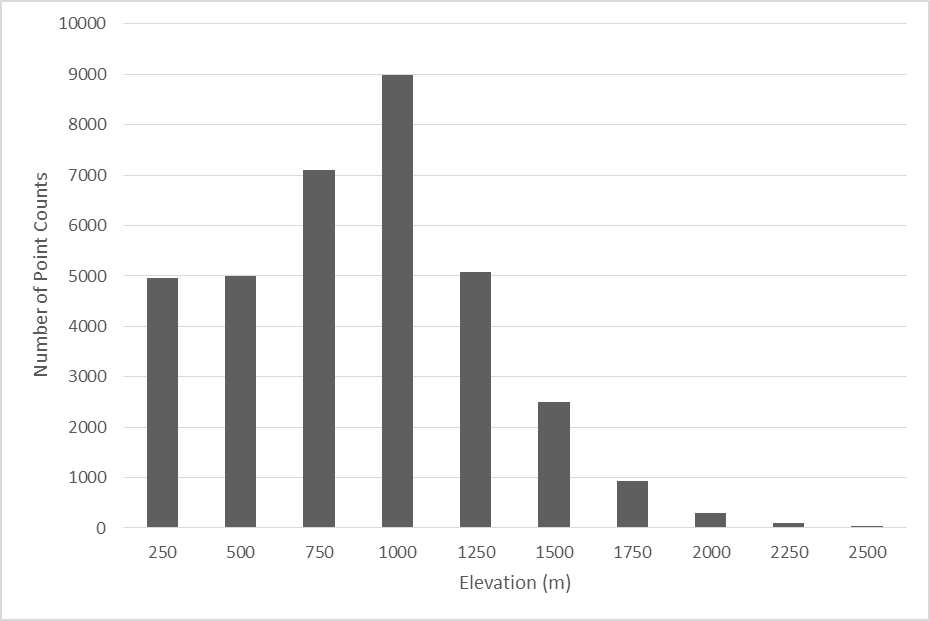 At Risk, Rare, and Colonial Species

A total of 16,557 records were submitted for 75 species assessed by COSEWIC and/or by the Province of British Columbia as at risk (see Appendix 1b). Of these, 6,201 records (37.5%) had additional documentation detailing a total of 12,500 individual sightings (including multiple observations of a single individual or observations from different sites within a square). We did not make an attempt here to separate species for which there are several subspecies in the province that might have been treated at different threat level, such as Great Blue Heron (e.g. the coastal race fanini is considered as a Special concern species by COSEWIC, but the interior race herodias is not threatened. The total in Appendix 1b included all records from both subspecies, which were usually not separated by observers).

An additional 5,698 records were submitted for 236 species that were considered rare provincially or sub-regionally within the province, of which 3,705 records (65%) had further documentation. Documentation rate is higher for rare species than for species at risk in part because we did not initially ask for additional documentation for some of the more widespread species at risk such as Olive-sided Flycatcher (2,671 records) and Barn Swallow (2,735 records), some of which only became listed during the course of the project.

In the case of colonial nesting species, supplementary documentation was required only for confirmed breeding records; 1,820 additional forms were submitted for 2,644 records of 37 colonial species (Appendix 1c), many of which were also included in the at risk and rare species totals above .

A total of 66,852 breeding evidence records for 2,561 10-km squares came from 130 institutional or external data sources, representing approximately 19% of all atlas records. There were also 100,075 point count records for 552 squares from 28 institutional or external data sources. External data sources are listed in Appendix 2, along with the number of records contributed by each source. Many external data sources were shared with the Atlas through the British Columbia Ministry of Environment’s SPII and other databases. Some of the largest datasets incorporated through the British Columbia Ministry of Environment databases and direct sources were from BC Hydro, British Columbia Ministry of Forests, Lands and Natural Resources, CANFOR, the Canadian Wildlife Service, Keystone Wildlife Research and Parks Canada. The Breeding Bird Survey (BBS) contributed 29,906 records from 389 squares. Note that BBS data were included as breeding evidence (distribution) data and not as point count data, because the BBS point count protocol (3-minute counts) differs from the Atlas point count protocol (5-minute counts).

A brief glance at the coverage map (Fig. 1) shows that survey effort is naturally correlated with centres of population and the volunteer base. In more remote areas, especially some northern regions, survey coverage is strongly correlated with the roads network. The difficulty of reaching higher elevations, which cover a very substantial area in British Columbia, is clearly apparent in Fig. 9. That difficulty was further compounded in three of the five Atlas years by large snow packs in some regions, which meant the timing of access to higher elevations was delayed, quite often until after some high elevation birds had stopped singing and were already feeding broods. So detection of higher elevation specialists was certainly under-recorded by the project. We operated the project under the assumption that much of what we were doing was compiling new inventory, and some information is always better than none. The project coordination team decision-making regarding deployment of volunteers and paid crews was based on attempting to achieve as realistically even a sampling as possible of different biogeographic regions, broad vegetation types and elevation ranges.

In a province the size of British Columbia, even with a 1,000-strong dedicated volunteer work force, biases like these are inevitable even with planning and mitigation. From 2009, the project mitigated these biases to the extent possible by actively supporting volunteers and paid crews to access remote areas by many innovative means, including horseback expeditions (in the Muskwa Kechika Wilderness Management Area in the far north and the Itcha and Ilgachuz mountain ranges in the central interior), boat-based expeditions to the headwaters of Bute and north coast inlets, and archipelagos like the Broughton and remote parts of Haida Gwaii, raft and boat expeditions along the Alsek and lower Stikine Rivers, floatplane access to remote lakes in central and northern British Columbia, like Spatsizi Plateau Wilderness Provincial Park, the northern Cassiar Mountains and northern Coast Mountains, and helicopter access to high altitude sites like the Bugaboo Provincial Park in the Purcell Mountains, and mine sites across the Omineca and Cassiar mountain ranges in the north. These efforts would not have been possible without the extremely generous help of many in-kind supporters, from industries to guide-outfitters, and foundations to holiday companies.

In addition to alpine and subalpine elevations, and some inaccessible northern regions, seabird colonies are the other major bird group – geographic area combination that was not well sampled during the Atlas. Outside the Strait of Georgia, which was well covered, few seabird colonies on remote offshore islands were visited except Triangle Island, and some colonies within and adjacent to the Gwaii Haanas National Park Reserve and Haida Heritage Site. There were substantial gaps around Haida Gwaii, the central-north coast, and most islands off the northwest coast of Vancouver Island. Seabird colonies in British Columbia have not been thoroughly surveyed by any agency since the 1970-80s (Rodway 1991).

The randomised nature of the Atlas point count survey protocol meant that some restricted habitats (e.g. some wetland types) were not sampled as well as they would have been had more dedicated wetland-specific techniques beyond the scope of the Atlas project been used. This was partially mitigated for some areas (e.g. the Fort Nelson River lowlands) by several project partners contributing datasets from wetland surveys to augment the standard Atlas protocol data collection.