How to read the Species Accounts

This section provides interpretation guidance for the accounts describing the 320 or so species for which breeding evidence was reported in at least one 10-km square during the atlas period (2008–2012). The primary purpose of the species accounts is to help the reader interpret the maps, graphs and related data from the British Columbia Breeding Bird Atlas, together with just enough natural history information from other sources to put those results into a meaningful context. We have purposely avoided providing detailed natural history information that is already well presented elsewhere (e.g., in Campbell et al.‘s four volume series The Birds of British Columbia 1990-2001, except where it is pertinent to interpreting atlas results. Outlined below are the main elements of a typical account, listed in order of appearance.

Species names are provided in English, French, and Latin, following the American Ornithologists’ Union’s AOU Checklist of North and Middle American Birds, up to the 55th supplement (2014).

This standard feature opens by clicking the box at the top right of the account. The fact box summarises at-a-glance the Atlas sample sizes and other data statistics including the minimum and maximum elevations that each species was recorded on point counts and/or rare species forms, and the conservation status (in 2014) and population trends (if available, with links to sources) for each species. The global importance of the British Columbian population refers to the British Columbia Ministry of Environment-generated Responsibility Score, which indicates the proportion of the world population in the province, based on population estimates which may or may not be accurate. A ranking of 1-3 means that British Columbia has a high responsibility for that species global conservation. 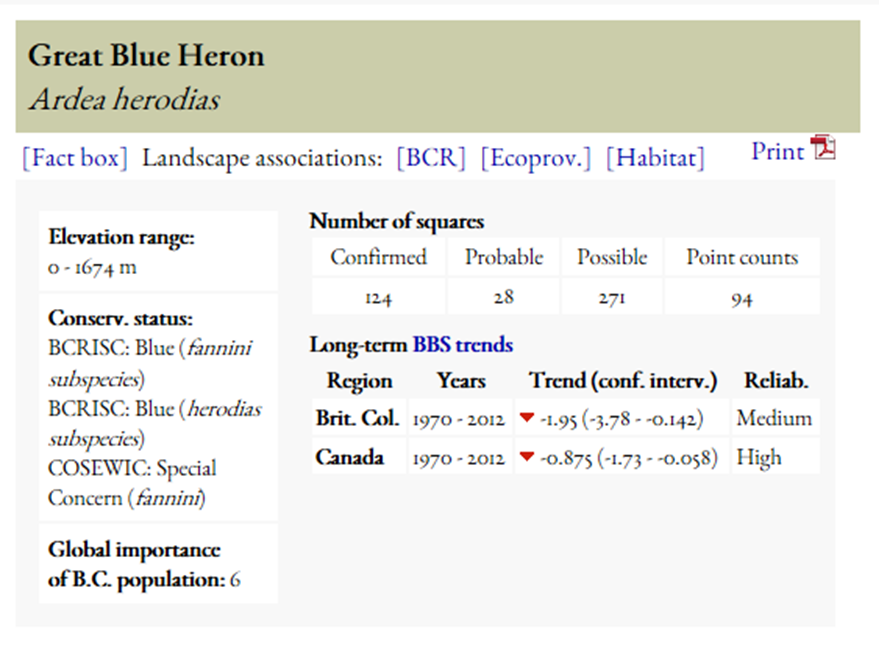 To the right of the species fact box are buttons to open bar graphs and tables that show average Abundance locally within different landscape and climate-vegetation categories, for species for which sufficient point count data were available to generate these statistics. The bar graphs are arranged to show highest to lowest abundance, in order. The paler bars indicate that the sample size is very small (i.e. the species was recorded on very few point counts within that category), and should generally be disregarded when considering which landscape and climate-vegetation categories support the highest local abundance of a species.

For each species, a map depicting breeding distribution in 10-km squares, and, for species for which sufficient data were collected, a map depicting probability of observation, and a bar graph illustrating relative abundance by elevation, is presented. The distribution map is the default option that shows up in the large box below the thumbnail icons. Move your cursor over the relevant thumbnail icon to have the map or bar graph of your choice appear in the larger box below, and then click on that larger box for a full size version of the map or graph you are interested in. Press the F11 key on your keyboard to best view the map (in full screen mode); when you are done, press F11 again to return to the normal viewing mode.

A menu bar at the top of the map provides a series of labelled overlay options to assist users interpret the maps. The options are: Bird Conservation Regions, ecoprovinces, Latitude/Longitude graticule, 100-km square blocks, Atlas administrative/coordination regions, and roads and cities. Click the box by one or more of the layers to overlay them on the distribution or Probability of Observation (PObs) map. Enjoy exploring the distribution and PObs patterns by ecological, geographic or coordination region. There is a great deal to be learned here; if you notice a pattern that is not described in the species account, do please let us know at the e-mail address below!

Maps of distribution in 10-km squares for every species show the Atlas squares in which the species was observed, coloured one of three shades of orange, to indicate the highest level of breeding evidence reported for the species in that square. Darker shades indicate higher levels of breeding evidence. Grey squares are those where some survey effort occurred but the species was not recorded. A gray-coloured 10-km grid square does not necessarily reflect a true absence; it may simply reflect relatively little survey effort occurred in that square.

The results of PObs models are presented as maps showing the predicted chance of finding each species across the province after 20 hours of survey effort during the breeding season, on a scale of 0.0 to 1.0 (0% to 100% chance), with darker colours indicating a higher likelihood of finding it (a higher PObs). The models are based on Atlas data and project to unsurveyed areas using environmental variables at a 1-km square scale. This shows the modelled distribution in much greater detail than the 10-km square map, providing an indication of how common the bird was. The main purpose of the PObs maps is to provide a province-wide perspective on the distribution and abundance of birds, and not to draw local scale conclusions; we recommend that users not “zoom in” too closely to make inferences from the maps. It is important to remember that PObs is a prediction from a model, based on the data collected by the Atlas. The values behind the maps are summarised in the landscape and habitat association tables and graphs.

The 300-500 word texts are divided into three sections that: i) introduce the reader to the bird; ii) describe the 2008-2012 Atlas results in the context of conventional knowledge; and iii) frame and discuss any conservation issues and provide recommendations. In these texts authors regularly refer to ecoprovinces, Bird Conservation Regions, and biogeoclimatic zones. British Columbia is a very complex place biologically and geographically. We are fortunate to have two detailed and complementary ecological classifications describing and mapping our complex ecological regions, which help to explain the patterns of distribution and abundance of birds and other fauna and flora (Cannings and Cannings 2004). Ecoprovinces are divisions by broad climatic area and major physiographic units such as plateaus, mountain ranges and major valleys; there are nine main ecoprovinces in British Columbia, which you can view using the map layer tool. Biogeoclimatic zones (in full: Biogeoclimatic Ecosystem Classification, or “BEC” zones) are areas with similar climatic characteristics and defined using the tree (or grass) species that dominate the climax forest types in those areas; British Columbia has mapped 16 biogeoclimatic zones. Bird Conservation Regions (or “BCRs”; Bird Studies Canada and NABCI 2014) are similar landscape units to ecoprovinces, only scaled up for continental rather than provincial/state application. Bird Conservation Regions are a common currency used by conservation practitioners throughout Canada, the United States and Mexico. Bird Conservation Regions are scaled up further into biomes, which are also referred to when describing the continental range of a species.

This section sets the scene for each species, establishing the reader’s familiarity with the bird by describing what makes it distinctive, summarising where it occurs worldwide, and how British Columbia fits into that broader context. In general, ecological terms are used rather than political ones (e.g., province or state names), because they more effectively convey the factors potentially influencing a species’ distribution.

This section summarises the Atlas five-year snapshot for these three related subjects. Distribution is described very generally using recognised geographic features; some of these are depicted on the map below and the macrogeology map in the Introduction. This leads into a description of what additional detail the PObs model and map tell us about the bird’s distribution and where it may be most common. For species with sufficient data collected on Atlas point counts, the text then describes where their main centre(s) of abundance are, including how common species are at different elevations, because altitude is a very important factor determining where birds live in British Columbia’s topographically extreme landscapes. 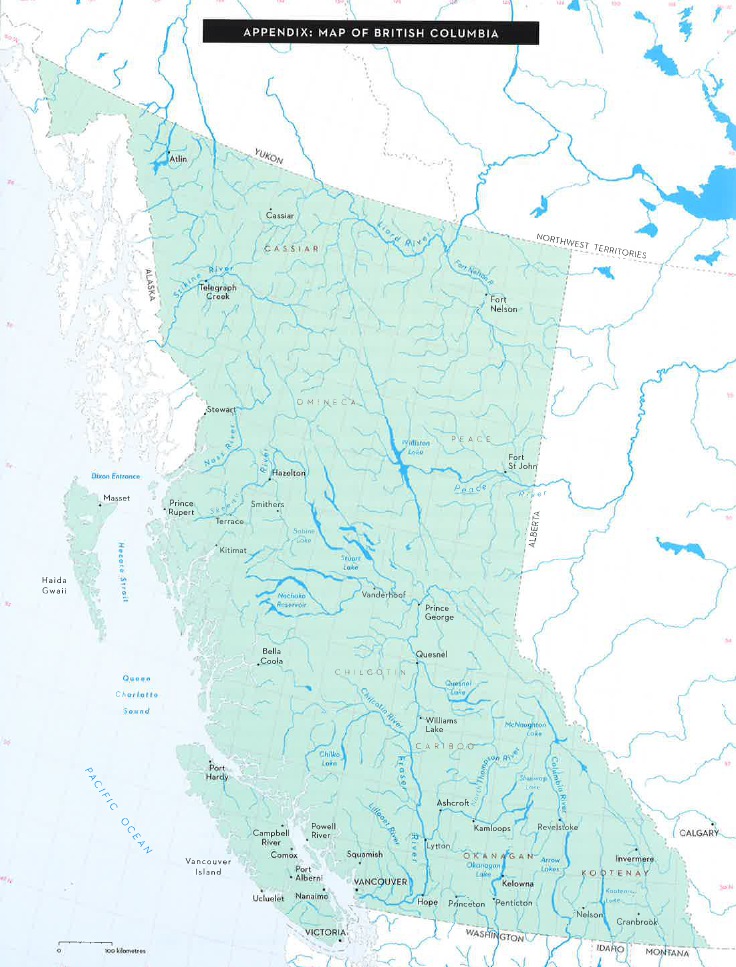 Major rivers and regions of British Columbia, reproduced from British Columbia: A Natural History published by Greystone Books (a division of Heritage Publishing), with kind permission of the authors

This section focuses on the new information the Atlas has provided since The Birds of British Columbia was published. Authors describe where there have been changes in range (distribution). Note that confirmed breeding in The Birds of British Columbia was based solely on data from the British Columbia Nest Records Scheme (Campbell and Preston 2008), which records data associated with nests and fledglings only, and not behaviours such as adults carrying food or performing distraction displays, which constitute confirmed breeding evidence under current Atlas standards. In making comparisons between the Atlas and The Birds of British Columbia, the authors and editors made every effort to ensure that this difference was accounted for in the interpretation of distribution changes during the period between these two publications. Authors suggest explanations for the pattern of distribution, abundance and habitat use, often using ecoprovinces, Bird Conservation Regions, or biogeoclimatic zones. Bird abundance in relation to ecoprovinces was described qualitatively in The Birds of British Columbia, and so provides a useful comparator for the Atlas results. As you explore the species accounts, it will become apparent just how many birds’ distributions hug the ecoprovince or Bird Conservation Region boundaries.

Brief descriptions of the broad habitat(s) in which each species was found during the Atlas are presented along with the finer habitat features that species appeared to prefer, drawn from Atlas data analysed by the 16 biogeoclimatic zones, the habitat descriptions documented by atlassers on rare and colonial forms, author and atlasser field observations, and/or from information published elsewhere.

Where relevant, this section summarises the factors behind conservation status designations, any changes in status since the Atlas began, conservation issues in relation to Atlas findings, and recommendations for further survey work, analyses, or conservation actions.

Individuals who assisted the species account author(s) in compiling information for and/or reviewing the accounts are acknowledged here.

The recommended citation structure for individual species accounts is:

For example, it is suggested that the Great Blue Heron account be referenced: