The basic sampling unit was a 10 km by 10 km (100 km2) square from the Universal Transverse Mercator (UTM) grid. British Columbia divides into roughly 10,000 such squares, which fall within one of five UTM zones: 7, 8, 9, 10 and 11 (Figure 1). Partial squares (less than 100 km2 of land mass and/or freshwater) occur along UTM zone lines, coasts and provincial boundaries. During data collection, partial squares of at least 10 km2 were treated as full squares (i.e., survey effort was comparable to that of full squares). Partial squares with less than 10 km2 of land mass and/or freshwater were surveyed less intensely than other squares. 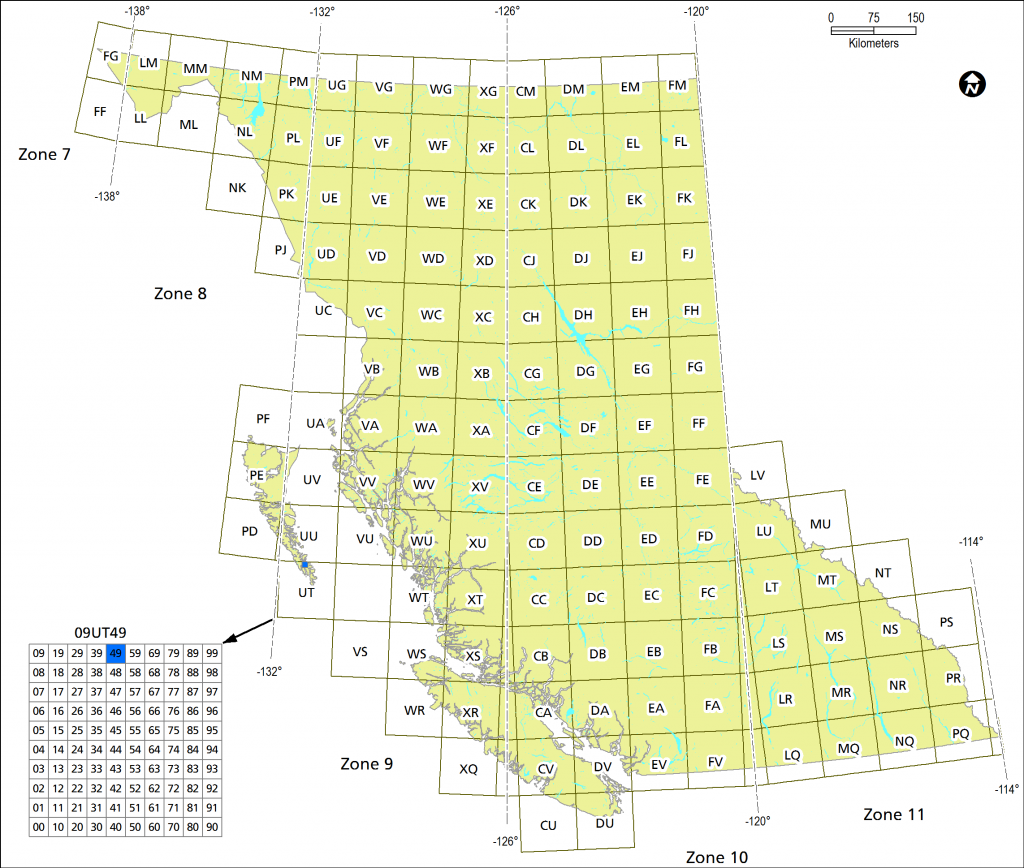 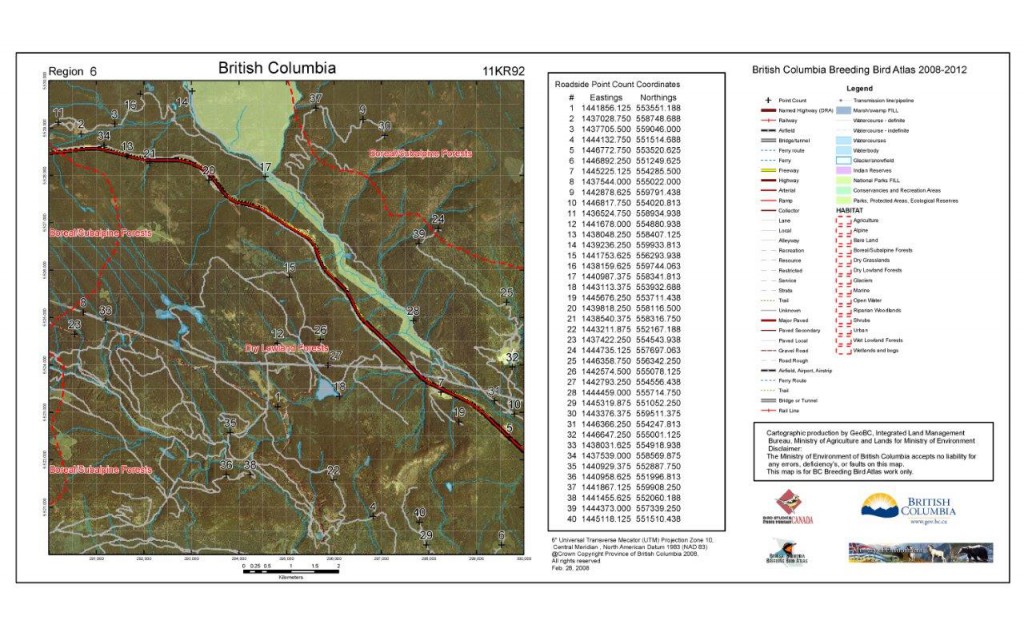 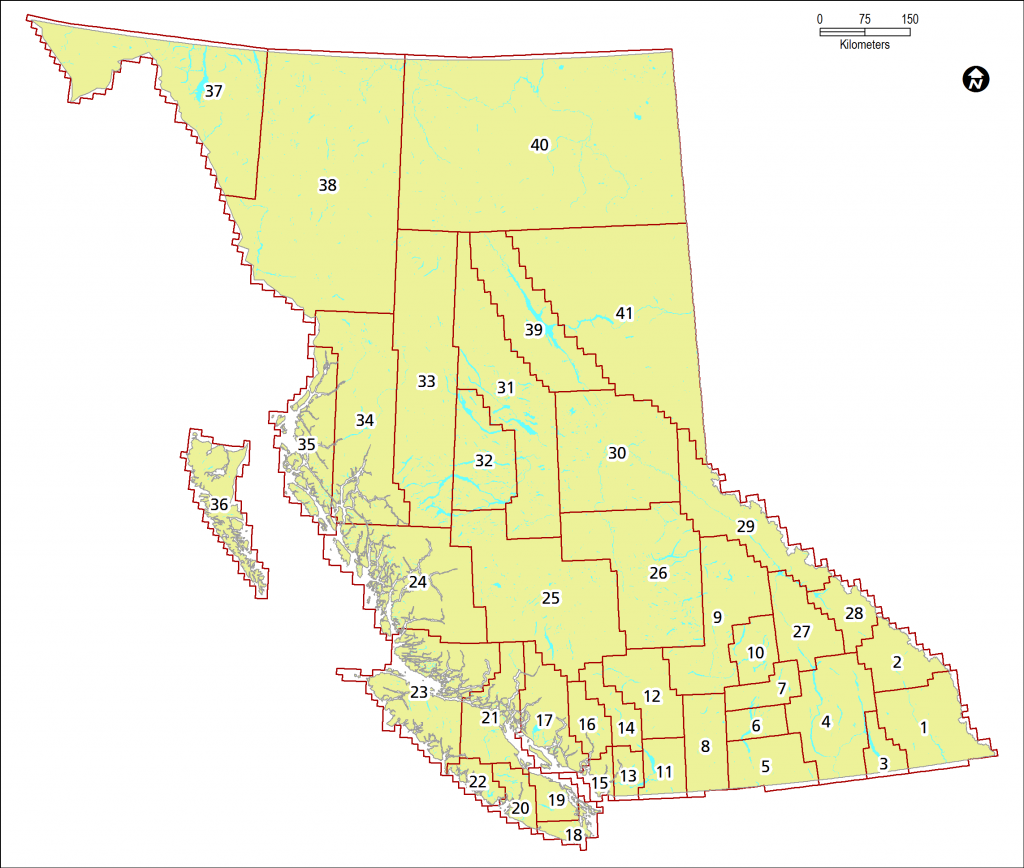 Figure 3. Administrative regions (Regional Coordinators for each region are listed in the Acknowledgements)

British Columbia was divided into 41 administrative regions (Figure 3). Atlassing activities in each region were managed by one or two volunteer Regional Coordinators (RCs). RCs served as the main contact and survey information source for atlassers within a region, and helped ensure that regions were adequately surveyed. How they did so varied, depending on the number of volunteers and the accessibility of squares in their region. In regions with a large volunteer base, like Greater Vancouver, Victoria – Southern Gulf Islands, and Central Okanagan, RCs spent much of their time assigning squares, training individual participants, and coordinating and managing volunteer efforts. In more remote regions with few participants, like Haida Gwaii, Dease Lake and Fort Nelson, RCs often conducted most surveys themselves. In addition, RCs participated in yearly planning meetings and reviewed all data submitted by atlassers in their regions. RCs were the backbone of the project and vital to its success. Their names are listed in a dedicated section of the Acknowledgements.

From 2008 to 2012, mainly from April to August of each year, atlassers systematically surveyed British Columbia square by square, looking for evidence of breeding birds. Atlassers followed standardized methodology used for other Canadian atlases, based on techniques initially devised for the first British atlas (Sharrock 1976), replicated in many places since (Gibbons et al. 2007) and promoted and refined by the North American Ornithological Atlas Council. For each species detected, the breeding evidence associated with that observation was classified into one of three categories: possible, probable, or confirmed (Table 1). Atlassers also kept track of square visits, the dates of surveys, the time spent surveying each square, and the visit during which each species was first detected (used to determine the Probability of Observation). Data gathered from these breeding evidence surveys constituted the bulk of data used to create the distribution maps.

Atlassers were also encouraged to submit so-called casual observations, that is, observations of breeding evidence made while not dedicating time to a complete visit to a square. For example, while driving through a square, an atlasser observed an American Robin carrying nesting material. Survey effort was not recorded for casual observations.

British Columbia’s extreme topography and access limitations made obtaining even an adequate coverage across all geographic areas and habitats immensely challenging. In each region, a series of squares that best represented the local habitat mix, based on a habitat algorithm were chosen as priorities for survey. These squares were surveyed based on opportunity, and where access proved too difficult, a more accessible square with similar characteristics was chosen. In regions with fewer participants, volunteers surveyed priority squares first, before turning their attention to other squares.

“Completing” Squares
A square was considered fully surveyed, or “complete,” once 20 hours of cumulative survey effort had been completed in it, or when a substantial number of species was detected in the square. To assist atlassers in completing a square, individual Square Summary Sheets were made available online. They detailed the species expected to be detected in the region, based on the expert knowledge of RCs and other advisors. Square Summary Sheets were automatically updated as data were entered. Atlassers were strongly encouraged to cover all habitats in the square, vary the times of day at which they surveyed, and extend the 20 hours of effort over days, months, and even years, to maximize the number of species detected. Whilst this type of temporal and seasonal variation in coverage is ideal, it was frequently impractical to achieve, particularly in regions with few surveyors and in more remote, logistically challenging areas to access. Thus many squares, particularly those far from human habitation, were surveyed once, usually over one or two days, sometimes using multiple surveyors. In order to maximise coverage, during the final year of surveys, the threshold for completing a square was reduced to a minimum of 10 hours of effort.

Point counts are timed surveys in which the observer records all birds seen and heard at pre-determined points. Point count data were used to plot abundance in relation to elevation, habitat and landscape features, and, in combination with distribution data, to map species’ Probability of Observation. Point counts were conducted from May 28 to July 10, starting no earlier than 30 minutes before sunrise and no later than 5 hours after sunrise. Counts were 5 minutes long, and species were recorded within an unlimited radius (i.e., as far as the eye could see and the ear could hear).

Atlassers also recorded all breeding evidence observed during point counts. Methodology is further detailed in the Guide for Atlassers and after testing various methods was modelled after Cadman et al. (2007)’s Atlas of the Breeding Birds of Ontario, 2001–2005, which was the first Canadian atlas to measure abundance. At the outset of the British Columbia atlas project, the coverage goal was to complete 15 point counts in each priority square. During the final year of data collection, following preliminary mapping and analyses, this goal was reduced to 10. Point count locations were randomly placed along roads at the start of the project. Each square map detailed 40 potential point count locations. Atlassers were asked to conduct counts at locations numbered 1 through 15 and, if one or more locations were deemed unusable (e.g., inaccessible or unsafe), to use subsequent points as replacements (16, 17, etc.). Once locations were selected, points were surveyed in any order.

Before data collection began, the habitat type at each pre-determined point count location was categorised using geographic information systems (GIS). In squares where on-road points did not adequately sample a representative proportion of habitats in the square, atlassers conducted additional off-road counts in the underrepresented habitat(s). For example, in many squares in B.C. at least one point count was required in subalpine or alpine habitats, to which there were typically no roads. The number and locations of off-road point counts were chosen by individual atlassers, who could ensure that they truly represented the desired habitat type and were accessible. Off-road point count locations were at least 100 m from the road and at least 500 m apart. Atlassers recorded UTM coordinates and habitat for off-road point count locations. The number of off-road counts was subtracted from the number of required on-road counts, so the minimum number of points required per square (15 or 10) was the same.

Point counts require a high level of birding expertise, as participants must quickly recognize species by song. Thus, fewer volunteers (272 total) participated in point counts than in breeding evidence surveys. To increase the number of point counts completed, dedicated one- or two-person field crews were hired each year to conduct counts in regions with few participants and/or difficult-to-access squares. Conducting point counts necessarily meant that in some cases less time was spent exploring squares, with mornings in the point count period often entirely devoted to driving from point to point and square to square to complete the counts, paying less attention to gathering additional breeding evidence. As a result, more general atlassing was conducted in the afternoon, when the majority of species are less active, potentially resulting in fewer detections, especially of unusual species or species not well captured by point counts.

Rare, Colonial, and At Risk Species 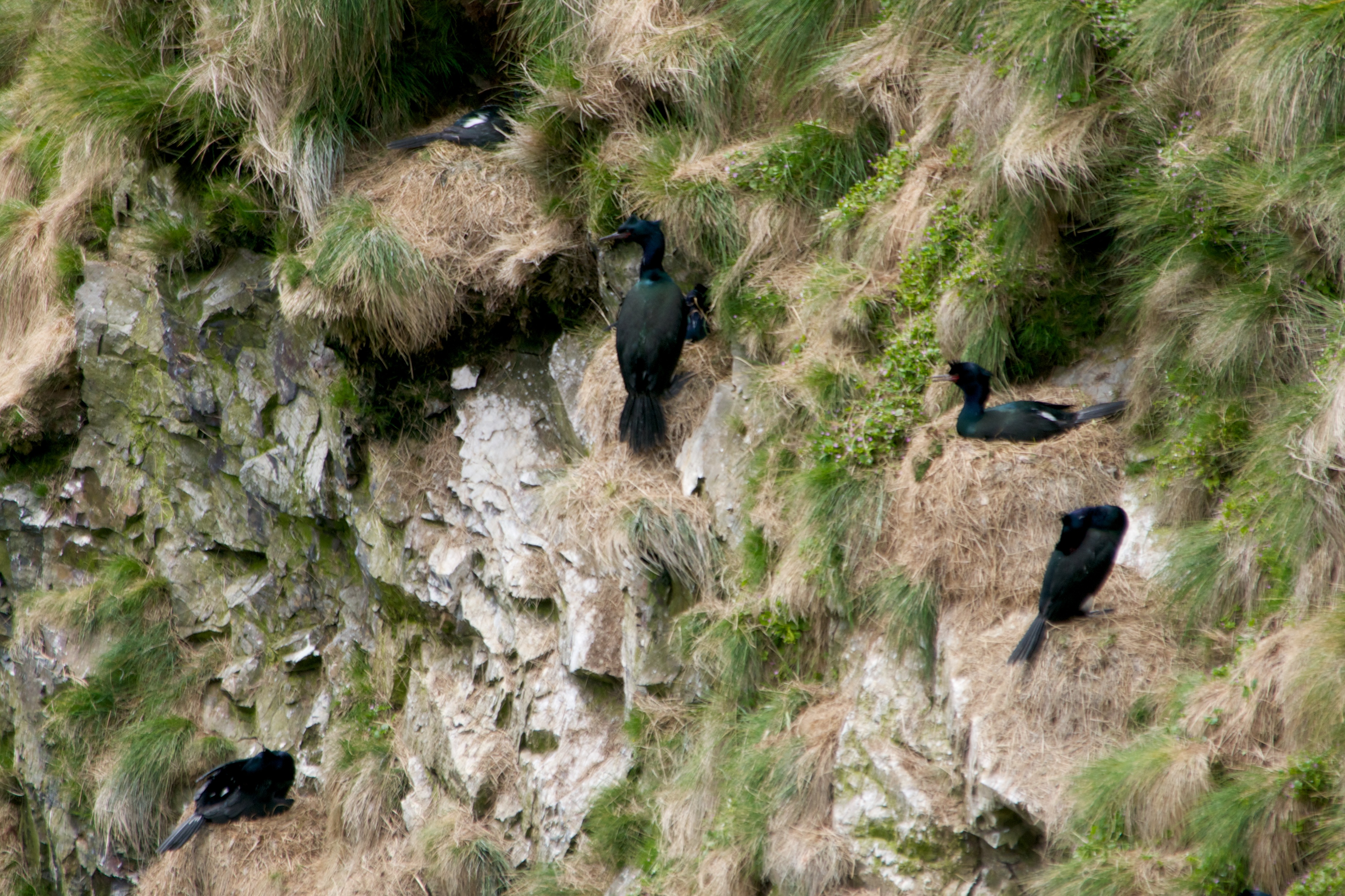 An emphasis was placed on thorough documentation of rare and colonial species. “Rare” species included species assessed as “at risk” (Special Concern, Threatened, or Endangered) by the Committee on the Status of Endangered Wildlife in Canada (COSEWIC), species assessed as Red- or Blue-Listed in British Columbia, and some species uncommon in British Columbia provincially, or in particular regions. For rare and colonial species, additional forms were used to record dates and times of site visits, UTM coordinates, species and habitat descriptions, and the number of adults observed (for rare species) or the number of active nests or pairs (for colonial species). Species for which such documentation was required are listed in Appendix 1b.

For uncommon species, atlassers were encouraged to thoroughly document how they identified the species (particularly if identification was challenging), as well as breeding evidence and habitat. For relatively widespread species at risk, like the Canada Warbler, atlassers were asked to focus on recording habitat information. In both cases, observers were strongly encouraged to record the UTM coordinates for their sightings using their atlas square map, the online mapping tools, or a GPS device. For Endangered species, such as Yellow-breasted Chat and Sage Thrasher, which are well monitored through other long-term management programs, atlassers were encouraged to report sightings only from previously unknown breeding locations, to minimize disturbance. Data from long-standing programs were then incorporated into the atlas database following the project’s completion.

Compatible datasets from other surveys that were conducted during the atlas period, and that focused on recording breeding species, were incorporated into the atlas database by assigning sightings a breeding evidence code and a square. Since most external data sources did not follow atlas protocols to assign breeding evidence, such observations were most often given a possible breeding evidence code. Data from external sources also infrequently included measures of effort and were thus entered as casual observations. External data were subject to the same review process as other atlas data and were omitted if they didn’t meet the standards for breeding evidence or if the location of the observation could not be assigned to a square. External data came from BSC-run projects, such as the British Columbia/Yukon Nocturnal Owl Survey, from other partners such as the Wildlife Tree Stewardship (WiTS) Program of BC Nature, from major provincial and federal databases (Breeding Bird Survey (BBS), British Columbia Ministry of Environment and federal species at risk datasets), from environmental consultancies who generously pursued permission from proponents to share data, and from industry-commissioned or conducted surveys for environmental assessment and related work. A full list is presented under Special Contributors.

Atlassers submitted data online or on scannable forms, from which data were transferred to the online database each year. The data management system automatically flagged records requiring additional review and for which additional documentation was required. Flagged records were typically for rare or colonial species but could also be unusually high numbers of individual species detected on single point counts, or species entered from outside their known range. RCs and Atlas coordinators reviewed all data submitted, with special attention paid to flagged records. Records that required more extensive review and additional expertise included those with potentially questionable breeding evidence codes or observations made outside the typical breeding season. Such records were sent to a Data Verification Working Group for review and a final decision on the record’s inclusion in the atlas.