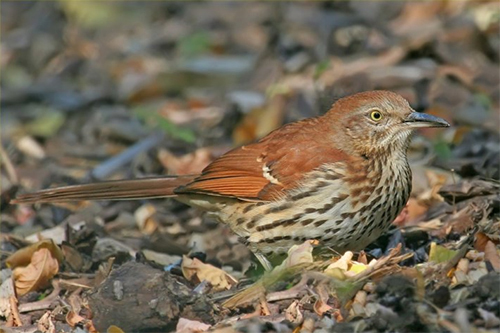 Characteristics and Range The Brown Thrasher, like other thrashers, tends to be heard more often than it is seen, despite its stunning, rusty-and-white plumage. It is a remarkable songster with one of the most extensive song repertoires of any North American passerine. The range of the Brown Thrasher spans eastern and central North America, south of the Boreal Forest to the United States' Southern Coastal Plains; it breeds in the northern portion of the range and migrates short to medium distances south. It is an accidental visitor to British Columbia, but has been expanding its range in several compass directions, including to the northwest, facilitated by land clearance for agriculture and fire suppression. During the 20th Century, it expanded into southern Alberta and non-breeding birds occur in the Rocky Mountain foothills close to British Columbia (Cavitt and Haas 2014).

Distribution, Abundance, and Habitat There are no breeding records from British Columbia (Campbell et al. 1997). The two records during the Atlas are from the Peace and Fort Nelson river lowlands, a long way from the nearest know breeding grounds in hedgerows, shrubby and riparian habitats in the prairie grasslands of southern Alberta. There was no apparent change in Brown Thrasher distribution between the first and second breeding bird atlases in Alberta (Federation of Alberta Naturalists 2007), but the long-term range expansion (Cavitt and Haas 2014) and proximity of current breeding populations to British Columbia suggest that there is a chance that this species could attempt to breed in the province in the future.

Conservation and Recommendations Whilst the Brown Thrasher has expanded its range, Breeding Bird Survey data show the overall population is declining. The decline is attributed to succession of shrubs and thickets in eastern portions of the range, and loss of shelterbelts and hedgerows through agricultural intensification in the western part of its range (Cavitt and Haas 2014).