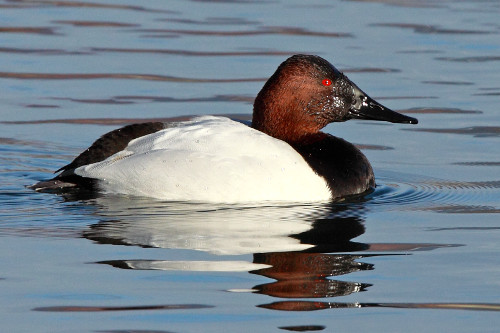 Characteristics and Range Large and elegant, the Canvasback is conspicuous on the open water, but when breeding in dense wetland vegetation it is secretive and easily overlooked. Found only in North America, breeding is centred on aspen parklands of southwest Canada, but many also breed in prairie-pothole regions and, in increasing numbers, in boreal forests of northwest Canada and central Alaska (Mowbray 2002). Most Canvasbacks winter in California, but some in the United States southern interior, Mississippi drainage, and Atlantic and Pacific coasts, including southern British Columbia (Campbell et al. 1990, Mowbray 2002).

Distribution, Abundance, and Habitat Breeding in British Columbia is concentrated in the Central Interior, Southern Interior and Boreal Plains ecoprovinces, with a few in other interior regions, especially the Southern Rocky Mountain Trench. The Atlas breeding distribution data match quite closely those published in The Birds of British Columbia in 1990, except that the Atlas data show more widespread breeding in the Southern Interior Mountains. There were insufficient data to plot Probability of Observation or assess abundance and elevation distributions, but, based on breeding evidence, the species breeds most often in the 500 to 1500 m elevation range, as reported by Campbell et al. (1990).

Conservation and Recommendations Across the continent, populations of breeding Canvasbacks fluctuate annually. Counts prior to 1960 were low and of concern (Mowbray 2002), but have increased since the 1960s, especially in the Canadian Prairies (Fast et al. 2011, CWS Waterfowl Committee 2013). Due to its preference for deeper, but productive water-bodies, Canvasbacks are susceptible to drought and will delay or forgo breeding if water levels are too low (Mowbray 2002). In the interior of British Columbia the species might therefore be affected by climate change if breeding areas experience warmer and drier conditions. The atlas data will therefore be valuable to track future trends in the core breeding areas and document changes in breeding distribution.