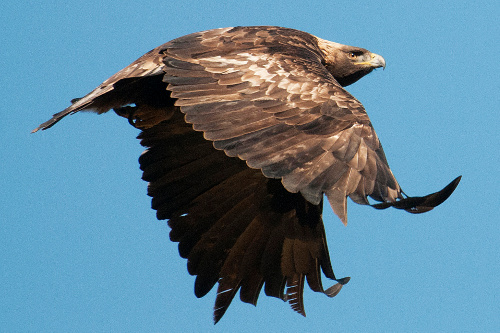 Characteristics and Range The Golden Eagle is a magnificent bird of prey. With a length of close to a metre and wings that span well over 2 metres, it is one of our largest raptors. One is unlikely to forget the sight of this enormous bird deftly turning and weaving to pluck a Yellow-bellied Marmot (Marmota flaviventris) from a rocky outcrop, or cruising along a cliff side looking for kid Mountain Goats (Oreamnos americanus). It occurs across the Holarctic, spanning Europe, Asia, North Africa, and North America, where its range is largely confined to the west. Most of the Golden Eagles that breed in northern British Columbia winter further south across western North America, but some, especially in southern parts of the province, are year-round residents.

Distribution, Abundance, and Habitat The Golden Eagle is widespread but quite sparsely distributed through most of the province except on Haida Gwaii (where it has not been found to breed), with clusters of probable or confirmed breeding along the middle Fraser River and in the rain shadow of the southern Coast Mountains, in the East Kootenay, the South Okanagan, and in the Haines Triangle area in the far northwest. Its distribution in British Columbia appears not to have changed much since The Birds of British Columbia was published in 1990. Generally associated with more remote areas, breeding also occurs close to human population centres.

The Golden Eagle is not as numerous as the Bald Eagle across most of British Columbia, except in some mountainous regions. Higher Probabilities of Observation match the clusters of distribution, with highest PObs values in the Southern Interior Mountains. Too few data were collected to draw conclusions about abundance. It is found across a wide elevation range from sea level to 2,010 m, but the PObs values suggest that it is most likely to be encountered in the alpine and subalpine biogeoclimatic zones.

The habitats occupied by the Golden Eagle vary widely, but typically included more open habitats including grassland (for hunting) surrounded by mountainous regions with subalpine and alpine habitats, and cliffs used for nesting.

Conservation and Recommendations In most of North America, the Golden Eagle is stable or increasing in population (Environment Canada 2014). Unlike many raptors, its primary diet of mid-sized mammals associated with non-agricultural habitats minimized the effects of pesticides like DDT. Instead, it suffered significant losses due to persecution from humans, especially in locations where it was suspected of preying on domestic sheep (Kochert et al. 2002). Reductions in human-caused mortalities have helped populations recover. Across Canada its population appears to have increased somewhat in the last 40 years, though data are sparse and based only on populations that have been monitored in Alberta (Environment Canada 2014). There are few data specific to British Columbia and therefore no provincial trend can be determined with confidence. Golden Eagle numbers are likely to remain healthy as long as extensive, wild mountain and grassland areas are available in British Columbia. Preserving habitat for its prey, especially within 3 km of nest sites, has been recommended as a management tool (Kochert et al. 2002), as has reducing disturbance near nest sites.