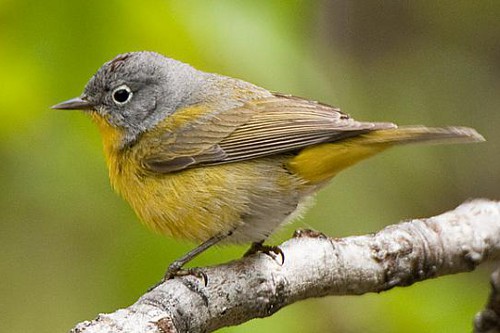 Characteristics and Range The sprightly Nashville Warbler is a medium to long-distance migrant and unique among North American warblers in having two widely separated breeding populations, one in the east spanning the Canadian Shield and Appalachian Mountains, the other in the west in the Cascades, Rocky Mountains and Sierra Nevada (Lowther and Williams 2011). It winters in the Mexican Sierra Madre and Central America, including the Pacific Slope of Mexico. Its wintering range overlaps with two closely related warblers of dry wooded country: the Virginia's Warbler (O. virginiae) and the Colima Warbler (O. crissalis), which some believe may be conspecific with Nashville Warbler (Curson et coll. 1994, Lowther and Williams 2011).

Distribution, Abundance, and Habitat Breeding is mostly confined to areas east of the Coast Mountains and south of 52°N, extending into some lower valleys of the southern Coast Mountains. This distribution has changed little since The Birds of British Columbia was published in 2001, except that no birds were found on Vancouver Island during the Atlas. Isolated possible Atlas breeding locations were noted just south of 56°N, in the Nass and Peace River drainages.

The probability of observing a Nashville Warbler reflects the clusters in distribution, and is highest in the valley systems of the West Kootenay and the Fraser River south of Chilcotin Junction, the North Thompson drainage and the South Okanagan. Point count data confirm that the Southern Interior and Southern Interior Mountains ecoprovinces still support the core of the provincial population, which occurs in highest abundance in the Interior Douglas-fir and Interior Cedar-Hemlock biogeoclimatic zones, and from 250-750 m, with abundance values tailing off steeply above that elevation. This expands somewhat on Campbell et al. (2001), who noted most breeding evidence was from 350-450 m, but that breeding was suspected up to 1,000 m.

Conservation and Recommendations Nashville Warblers are not of conservation concern in British Columbia, where global responsibility for conservation stewardship is low and Breeding Bird Survey data suggest an increasing population trend, albeit with low reliability. The species' ability to adapt to second-growth forests, cleared areas with shrub growth, and other recovering disturbed sites suggests that specific conservation strategies in British Columbia may not be warranted.